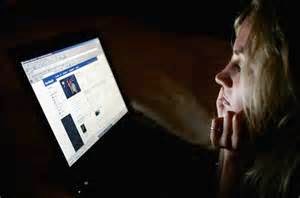 How often do you check Facebook?  Once a day?  Twice?  Nine times?  What are you checking for?  What are you expecting to see?  Hopefully, your answer is something like ‘I check it at least 5 times per day to see if Jake has posted anything funny or informative’.  If not, it’s likely that you, like most of us, are skimming passed the cat videos, foodie pics and gadget ads until we find a post we don’t like.  I’m not talking about the plethora of unsettling political posts (thanks, John A.).

No, I’m talking about the picture of your friend, Sally, hamming it up in a lame yoga posture on the beach in Majorca taken by her new, handsome, tall, charming, and rich husband.


Typical FB posts are like highlight reels.  They feature only the best events of a person’s life.  For instance, last week I read a post celebrating the fact that a new real-estate partnership had closed its third deal in just over a month.  Other common posts feature happy things like graduations, college acceptances, job promotions, awesome vacations, and super exciting parties to which I wasn’t invited. (Not that I would attend their stupid party anyway.) We all like to post the cool stuff that’s happening in our life, but we seem to get a little snippy when others do the same.  It’s common to feel the temptation to comment with something like “I’m glad Junior got into Lower Southeastern Nimrod State University; I guess the courts must have sealed his Juvie record” or “Wow, engaged again. And so soon”.

You see where I’m going with this?  As humans we can only take so much good news that isn’t our own.  Sure, we can be happy about your early retirement to Fiji, but we’d be happier, even delighted to see a post where you’ve swollen up like Veruka Salt after a tsetse fly bit you on the ass.  Of course, we’ll never get to see that pic unless we’re really lucky because rarely, if ever, do we post anything bad or embarrassing. It’s not that we’re bad people – we just tend to be just a wee bit judgmental, jealous, envious, self-righteous and spiteful; in other words, we’re normal and a recent study proves it.

University of Houston researcher, Mai-Lyn Steers, recently published a study linking time spent on Facebook to symptoms of depression.  Her data indicates that the more time we spend on social media creeping on the lives of others the more dissatisfied with our own lives we become.  (Okay, all together now:1-2-3 Duuuuh.)  Steers points out that it’s not social media itself that causes depression, but our reaction to it. Seeing postings about the success and happiness of "friends" causes us to reflect negatively on ourselves, which leads to depression and depression leads to ill feelings toward others.

Social comparison is nothing new.  It’s been studied formally since the 1950’s and informally since Phyllis the cavewoman hated her next-cave neighbor, Margaret.  “That bitch acts like she’s the queen of everything because her husband walks upright and makes fire”. The problem is not

that someone else achieves something
good, like when the Go-Pro guys sells his company for hundreds of millions of dollars.  Most of us say 'Cool, good for him". The problem starts when we know the person. If we know the guy our reaction is quite different. Social media is full of people we know (or kinda know)so we can’t help but compare. So we're all okay with the Go-Pro guy with exception of his former UCSD classmates who all feel like losers and wish he'd get bit by that tsetse fly while it all gets captured real time and in high-def.

So what’s the answer? What are we going to do about these negative feelings? Below I’ve included some possible strategies:

See?  We’re feeling better already, but does simply posting celebratory comments change how we feel about ourselves?  The answer to that is ‘some’, but you’re on your way and the rest comes in time. It helps to remember that no one’s life is without heartache, disappointment, and the occasional dose of “I suck, what the hell’s wrong with me”.  We all suffer from the terrible too's.  Too short, too tall, too fat, too skinny, too stupid, too handsome (that’s me), too white, too black, WAY too Asian, too every damn thing you can think of.

The best way to be easier on yourself is to be easier on others.  Getting pumped about the lives of our friends is the fastest, easiest way to get pumped about our own lives.  Sure, sometimes little things don’t warrant a cake and streamers, but it sure is fun to go buckwild over something like finding a $10 bill in the hamper or when your brother actually shows up at his parole hearing on the right day.

Well, that's my two cents and it's worth every penny.