Attractiveness - Why We Want It and How To Get It

The Truth About Why We Exercise 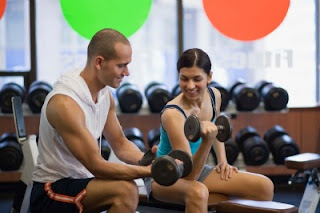 One thing that differentiates my approach to fitness and specifically the Pilates Method from every other trainer out there is that fact that cardiovascular health, strength, and flexibility, although important, take a back seat to your back seat. In other words, my primary focus is to make a more attractive you. Is this shallow? Yes, but for you as the client, it gives you the biggest bang for your fitness buck.


Now before you read this you’ll have to promise me that you’ll keep in mind that this article reflects scientific and sociological research. Read the article all the way through because there is good news for everyone.


Study upon study has made clear that attractiveness is the greatest determining factor to a happy and successful life. I know this might suck a little, but the naked truth is we live in a world of subjective perceptions, first impressions and snap judgments. Whether we’re picking up the kids from school, interviewing for a job, or sipping margaritas poolside, the people who see us evaluate us and they do so in the blink of an eye. In less than a second an impression is made. As unfair or unqualified as they are, these impressions have an effect on our lives through the people we meet, the jobs we get, who we fall in love with and the children we produce. All those things affect our self-esteem and the whole damn thing goes around again in a Kinseyan death spiral.


In a 2004 study, Kanazawa and Kovar theorized that, attractive people were likely to be more intelligent. Why? None of the researchers committed to any one theory, but they did believe it related to natural selection. The superior cave man was taller than most, had broad shoulders, a small waist and could beat the living crap out of smaller, funnier and cuter cavemen; as a result he commanded more resources. He had a big, warm cave with an ocean view and ate out a lot. This caveman got the hot cavewomen. What’s a hot cavewoman? Broad hips for producing strong cavebabies, big boobs for feeding them and a bangin' backyard. After thousands of generations things haven’t changed a whole lot. The dudes who are most capable in our economy tend to have their choice of women – they will choose the most attractive ones to mate with. Whether or not this is fair doesn’t really matter, its biology.


We’d like to believe that we’ve evolved past this primitive coding, but Kanazawa and Kovar don’t believe we have. Even though men don’t need to possess the strength and club speed to whack a brontosaurus to death just to show a girl a good time doesn’t mean that women have given up on height, strength and a square jaw as desirable features. (eHarmony, in response to hundreds of thousands of complaints recently resorted to only matching women with taller men.) Even in the nerdy domain of high-tech where brains count for a lot its better to be a good looking geek than a homely one, especially when you’re trying to get others to follow your lead and invest in your ideas.


This doesn't always bear out. Women often choose less attractive guys for a boyfriends or husbands (called the Bernadine factor), but this is shoulder-hopping the biological wave. In fact, a UCLA and Univeriversity of New Mexico study indicated that no matter who a chick is partnered with at the moment she’s more likely to cheat with more attractive guys during ovulation. So even though she prefers to be married to the less attractive guy for any number of reasons, her ovaries know the difference and they want Kobe Bryant. Science sucks.


Now it’s important to define attractiveness because people, especially women, get attractiveness confused with beauty and thinness. In this context, attractiveness refers to the general perception of the majority of a society arrived at scientifically. One might believe that perceptions vary from one society to another, but international studies suggest that there really isn’t too much difference other than men in drought ridden areas prefer women with a bit more meat on their bones.


Another important thing to note about attractiveness is that facial symmetry (beauty) only accounts for a small portion of the attractiveness quotient. Body shape (shape, not size) accounts for a lot more schwing. For women, what counts in the eyes of males is different than how women evaluate themselves and each other. Males are much more attracted to lower waist to hip ratios than they are facial symmetry or over-all size. Sure, some studies show that in a “singles” situation men will go for the prettier faced, narrower hipped woman, but those same studies showed that this interest is more so for the prospect of a brief sexual encounter. In other words, he is less likely to consider those women to be serious candidates for marriage and children. It’s the curvier girl that’s proportionate that he wants to make babies with and science backs that up with sperm counts – hippier girls evoke higher sperm counts from their sex partners. I’m not dis’n skinny chicks, skinny chicks can also have dramatic waist to hip ratios. But if you’re in the less curvy beautiful faced category, finding quality long term partners can be a greater challenge, you’ll have to move more slowly and be more discriminating than your curvier friends.


So maybe by now you’re thinking you’ll never find a guy because you don’t have that stupid waist/hip thing, or you're a dude that doesn't fit the the square-jawed, 6'2" ideal, don’t despair because we can hack the program. Here’s how. The way we move is also an important factor in attractiveness as a 2007 study points out. In this collaboration between Texas A&M professor Louis Tassinary and NYU smarty Kerri Johnson, they found that the way women and men walked made a hella-difference to their perceived attractiveness. Over 700 people were shown videos of people walking and were told to evaluate their attractiveness on a scale of 1-10. The results showed that women’s scores jumped by 50% when they swayed their hips. When males swaggered their scores doubled. Sways and swaggers have nothing to do with beauty, they have everything to do with confidence. So maybe you’re a woman who doesn’t have such banging curves or you’re a guy who’s height or shoulders don’t have the Charles Atlas seal of approval, you can bridge the gap with a little attitude. Just work it.


So how does this relate to Pilates and specifically the way we do it? We get women of all shapes, sizes and levels of ability, but our goals are pretty much the same: trim the waist and lift the butt (the waist to hip ratio). Improving this ratio always yields positive results. Sure, some need overall weight-loss and that happens in time, some would like to be stronger and more flexible and those too will happen, but body shap and attitude makes the greatest impression on others and that impression counts. First impressions set the tone for all of our relationships, social, professional or otherwise and those relationships set a course for our lives. So, it should be clear… if you want a better life, do a better workout - the kind of workout that gives you the results that matter most.